THE VERY DARK SIDE OF COCONUTS 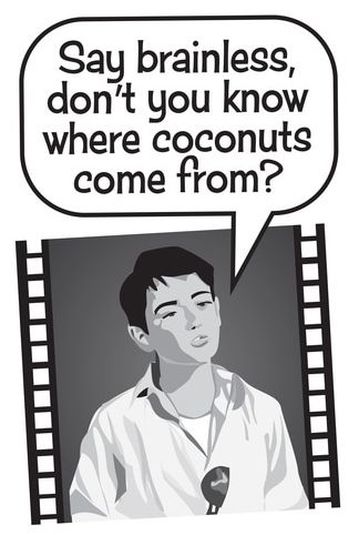 Are coconuts vegan? Given that coconuts come from plants, the obvious answer to that question would seem to be yes. But for those who practice a vegan diet because they do not want their dietary choices to harm animals, the way in which many coconuts are harvested means that consuming them, or products made with ingredients derived from them, does cause harm.
From vegan cheeses, butters, and veggie burgers, to shampoos, cosmetics, and non-toxic household cleaning products, coconuts and their various derivatives (water, oil, milk, cream, meat, and more) have become the darling of the vegan, raw, and health food movements. In 2016, one new plant-based product was introduced almost every single day, 100 more than the year before, an increase of 11%. Driving this change is growing concern about animal cruelty. Yet in an ironic tragedy, the majority of new vegan foods are either coconut-based or contain coconut-derived ingredients, substituting one form of animal cruelty with another. Indeed, the prevalence coconuts have begun to play in the promotion of the vegan diet and in vegan product innovation should alarm anyone concerned about animal welfare. Given that coconuts are a fruit, or more accurately, a drupe, and therefore 100% plant-based, how can this be so?
Eighty-five percent of the coconuts for sale across the globe come from Southeast Asia—countries like Thailand, Malaysia, and Indonesia—where they are frequently, and in some of the countries, almost exclusively, harvested by primate slave labor.
Agile and adept climbers, pig-tailed macaques are taken from the wild as babies by poachers who shoot their mothers. They are then chained by the neck and forced into submission through fear and pain. With whips and beatings, the primates are trained to climb trees and pick coconuts.
This abuse includes forcing the monkeys to stand and walk upright for long periods of time—an unnatural position for these animals—by hoisting them by the neck overnight so that just the tips of their feet touch the ground. This forces the young animals to develop strong legs muscles or suffer asphyxiation.
Using monkeys to harvest coconuts is profitable, as they can work ten times quicker than a human and cannot defend themselves against exploitation. Monkeys are not only worked to the point of exhaustion—one trainer admits they faint during the course of the day—they are fed stimulants and caffeinated beverages to force them to work even harder.
In addition to enduring the abuse, the long, torturous work hours in hot, humid weather, and the grueling physical labor of climbing vertical, nearly 100-foot trees over and over again for hours on end, day in and day out, the primates must endure dangerous working conditions. Overseers force them to jump from tree to tree by grabbing unreliable palm fronds, something they are often frightened and reluctant to do because if the fronds detach from the tree or break, the animals could fall to their deaths. Not only are these primates brutalized, they are denied any autonomy or ability to socialize with their kind. It is, in every sense of the word, slavery.*
How do you know if the coconut-derived ingredients** in a particularly product used primate slave labor? Unfortunately, reaching out to food companies to inquire does not offer much clarity. Many companies ignore even repeated requests for clarification, while those which do respond almost uniformly claim their coconuts are primate-labor free because their supplier tells them what they want to hear. And yet, since Southeast Asia supplies more than three-quarters of the world’s coconuts and so many of the plantations there use primate labor, the casual assurances are dubious, especially when, in the case of pure coconut products such as cream or oil, a Southeast Asian country is listed on the label as the country of origin. In fact, one coconut industry spokesperson has admitted that "such claims are ‘hard to believe’ since in many countries such as Thailand, monkeys pick 99% of the coconuts harvested."
As soon as we became aware of this information, we stopped buying coconut products or products from companies which source their coconuts from countries like Thailand. For coconuts picked in other countries, we stopped buying such products if the companies do not work directly with and have on-site presence at the coconut plantations themselves to give those assurances teeth.
Instead, we choose those products sourced from parts of the world, such as the Americas, where there are no pig-tailed macaques or other primates, as doing so ensures that such animals are not exploited in this terrible way. To acquire the coconut ingredients called for by a few of the recipes, therefore, please see links below for where to purchase primate-labor-free coconut products.
Please also join us in working to increase awareness of this little known issue that demands far greater advocacy from the animal protection movement. To that end, download and print out the free educational flyer below to distribute to your family, friends, coworkers, and restaurants that sell coconuts or coconut-based dishes. Please also contact those companies selling coconut-based products to alert them to this tragedy and encourage them to change suppliers for their coconut ingredients.
That so many of the people driving the booming coconut industry—and with it, an increase in primate slavery—should be vegans and therefore people of conscience may be a tragic irony, but it also provides great hope for change.

HELP PRIMATES BY SPREADING THE WORD

Click here to download a flyer (front and back) to distribute to family, friends, coworkers and restaurants to educate them about the dark side of coconuts and to encourage a boycott of all Southeast Asian coconuts harvest in this cruel way. NOTE: This flyer is designed to be half-page and printed on the front and back. 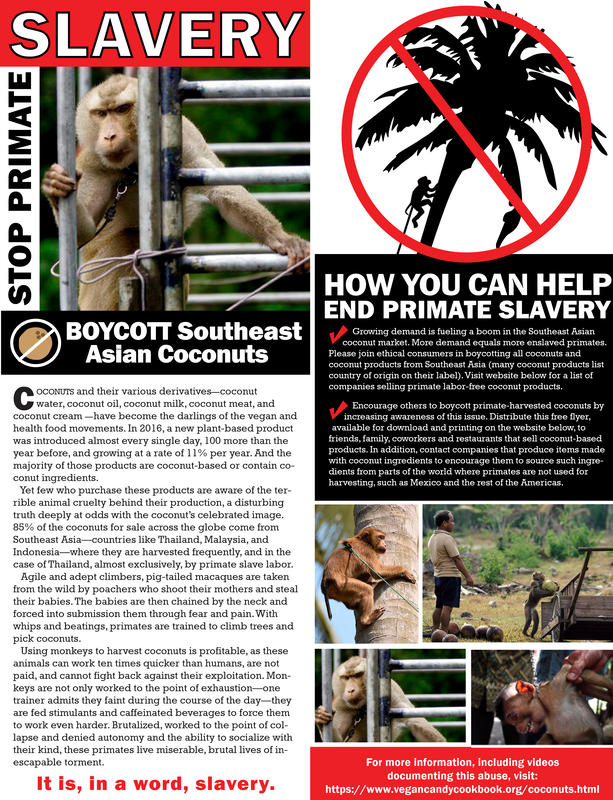 Some of the following ingredients are always derived from coconuts (those
​with the prefix “coca”) and others may or may not be:

Click on links below to purchase coconut products grown without the use of primate slave labor:
Coconut oil
Shredded coconut
Coconut Butter (also called coconut manna and mantequilla de coco: note that this is not the same as coconut cream).
​
Note that this cookbook contains a recipe for how to make delicious, homemade coconut milk from scratch using using shredded coconut.